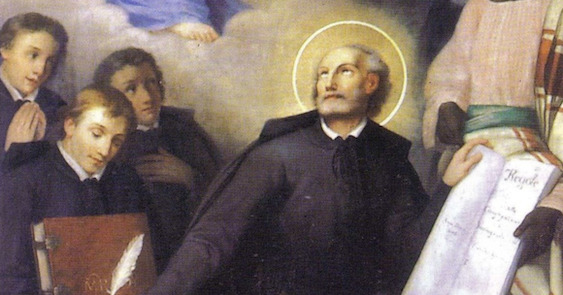 Saint John (Giovanni) Leonardi was born in 1541 in Diecimo, in the province of Lucca, Italy. When he was seventeen years old, his father enrolled him in a regular course in pharmacy in Lucca with plans for him to be a future pharmacist. John agreed to follow this path and worked very diligently to achieve his goals.

After studying for more than a decade, John was able to open his own shop; however after a mature reflection and much prayer, he decided to enter the priesthood. He left his career to be a pharmacist and began taking theological formation courses.

As a priest, John realized how his passion for pharmaceutics had helped him in his vocation. With his pharmacist background, he was able to help people discover “the medicine of God” which is Jesus Christ crucified and risen, “measure of all things”. He firmly believed that all people needed this medicine and he desired to “start anew from Christ”, as he often said. He spent a lot of time ministering in hospitals and prisons and spreading “the medicine of God” to these people.

John decided to dedicate himself with enthusiasm to the apostolate among youth through the Company of Christian Doctrine. On September 1, 1574, he founded the Congregation of Reformed Priests of the Blessed Virgin, later known as the Order of Clerks Regular of the Mother of God. He encouraged his disciples to have "before the mind's eye only the honor, service and glory of Christ Jesus Crucified," and, like a good pharmacist, accustomed to giving out medicines according to careful measurements, he would add: "Raise your hearts to God a bit more and measure things with him." He chose the Blessed Mother to be the patroness of his order because he had a strong devotion to her. He always kept his gaze on our Lady, and she was his teacher, sister and mother who protected him and led him closer to Jesus Christ.

During his priestly life, the Church was under spiritual renewal and many new religious institutes were forming. John knew what the real medicine was for social and spiritual evils and he explained it by saying, "Christ first of all, Christ in the center of the heart, in the center of history and of the cosmos. Humanity needs Christ intensely, because he is our "measure." There is no realm that cannot be touched by his strength; there is no evil that cannot find remedy in him, there is no problem that cannot be solved in him."