"I felt a mysterious force inside me that supported me" 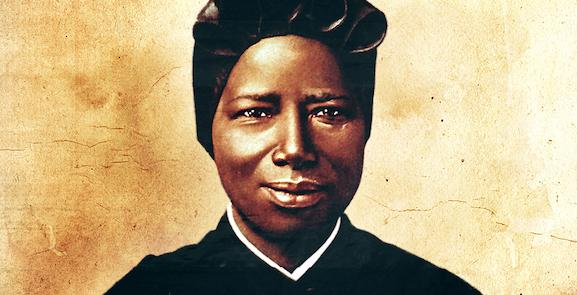 Josephine Bakhita (1869-1947), a former Sudanese slave who became a saint, is well known in Africa, but still too little known in the West. Her youth was rich in unusual events, but it is her years as a religious that are the most important.

... Bakhita completed her religious instruction towards the end of 1889, and, on January 9, 1890, she was baptized by Archbishop Domenico Agostini, Cardinal Archbishop of Venice. On that same day she was also confirmed and received Holy Communion for the first time. She then took the name of Josephine, after her baptismal godmother, while keeping the names of Fortunata and Bakhita, and added that of Mary to place herself under the protection of the Blessed Virgin. Dressed in the white garment of her baptism, she made the consecration to Our Lady, and received the medal and the blue ribbon of the Daughters of Mary.

Bakhita had a deep devotion to Mary: “The Blessed Virgin protected me when I did not even know her. I was in the depths of discouragement and sadness when I was a slave, but I never despaired, because I felt a mysterious force inside me that supported me.” She eventually became a nun. How did that happen? The Mother Superior, Anna Previtali, knew that skin color or social position are not obstacles to becoming a Sister.

On December 7, 1893, Bakhita entered the novitiate of the House of Catechumens in Venice, and a year and a half later, on June 21, 1895, the feast day of the Sacred Heart, she received the religious habit. On December 8, 1896, in Verona (Veneto), she pronounced her first vows in the very house where the founder, Madeleine de Canossa, had lived. She also received a medal of Our Lady of Sorrows.

Author of the first biography in French: Joséphine Bakhita, l’esclave devenue sainte (Josephine Bakhita, the slave who became a saint)