December 13 – Our Lady of the Sainte Chapelle (France)

The Lord and his Mother filled this soul with immense graces 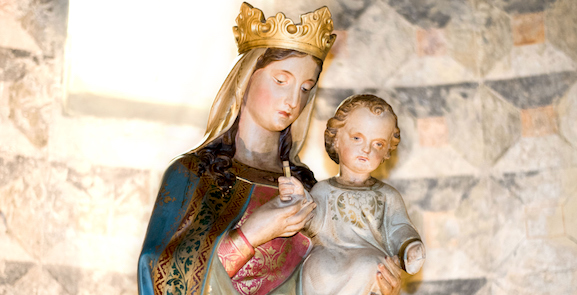 Mr. Joly was an elderly man, the last of the royal ministers of the martyr king Louis XVI (the French king killed during the French Revolution). Attached to the sect of the so-called philosophers of the 18th century, he had practiced no religion since his youth. Although recently blind and sick—and over 80 years old——his intellectual faculties had not diminished at all. He still worked as a legal consultant for many households whose interests he governed.

The man’s parish priest had called on him a dozen times, but each time had been turned away. On Monday, December 12th, the priest returned, and this time insisted on being let in. After a few minutes of merely polite conversation, Mr. Joly suddenly told the priest:

"Father, would you be so kind as to give me your blessing?" Then he added: "Your visit does me much good, Father! I cannot see you, but I feel your presence. Since you came to me, I have been experiencing a peace, a calmness, an inner joy that I have never known."

The priest began to pray ardently to the Virgin Mary. Grace was making its way into the man’s heart, so he didn’t want to leave without hearing Mr. Joly’s confession. The Lord and his Mother filled this soul with immense graces—the life of the sick man was prolonged by many years, and afterwards all the days of his life were dedicated to the faith, to the love of God and to submission to his divine Will.