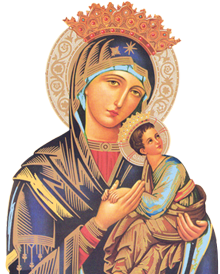 The short and enlightening email, free of charge,
to discover and love the Virgin Mary.

The Role of the Blessed Mother in the Economy of Salvation

The Sacred Scriptures of both the Old and the New Testament, as well as ancient Tradition show the role of the Mother of the Savior in the economy of salvation in an ever-clearer light and draw attention to it. The books of the Old Testament describe the history of salvation, by which the coming of Christ into the world was slowly prepared. These earliest documents, as they are read in the Church and understood in the light of a further and full revelation, bring the figure of the woman, Mother of the Redeemer, into a gradually clearer light. When it is looked at in this way, she is already prophetically foreshadowed in the promise of victory over the serpent, a promise that was given to our first parents after their fall into sin. Likewise, she is the Virgin who shall conceive and bear a son, whose name will be called Emmanuel. She stands out among the humble of the Lord, who confidently hope for and receive salvation from Him. With her, the exalted Daughter of Sion, and after a long period of waiting for the promise, the times are fulfilled and the new Economy established when the Son of God takes a human nature from her that He might in the mysteries of His flesh free man from sin.